A competing telecommunications company was teetering on the brink of failure. How could anyone predict that, within six months, it would see a resurgence that would keep even the traditional players taking notice? In an industry ridiculed as worse than the IRS in customer service, and whose players were choked daily by rampant price-driven competition, its transformation resulted in this small regional telecommunications company becoming a nationally recognized player in its industry.

After almost two and half years of operation, the newly founded telecommunications company had failed to generate the revenues and cash flow to keep itself afloat much longer. Pressure was building for their private equity group to switch up their business strategy from a “build” to an “acquisition” strategy, and they began to search for a new leader who could shake things up and facilitate a turnaround.
The telecommunications industry was like many other corporate cultures: rife with infighting, power struggles, lack of communications, fragmentation with competing fiefdoms and finger pointing. The internal structure was traditional – top down and fragmented--the field operations against corporate. Call Centers were often not integrated with the field teams.

This company was focused on beating the competition rather than on servicing the needs of the customer. The new leadership believed that the only way for them to differentiate and survive was to deliver a unique experience to their customers who had very few options and low expectations of service. The company had a perfect opportunity to win over the market, but to do so they needed to quickly educate, refocus and get every employee on board. RAD became their service structure and the platform to make this happen. As you will see, RAD successfully became the foundation of their behavioral operating system and the framework for their turnaround.
RAD synchronized every employee and department to the needs of the end customer. According to the CEO at the time “Everyone got to know the customers, what they needed, and what they expected. Everyone knew who the internal customers were and who needed to be served in order to meet the external customers’ expectations. It was magical.”

Over several months, employees began to experience the impact of the RAD design, the culture change, and the necessary commitment of leadership. The company grew. The whole place was productive and energized. The front line felt empowered to do what they knew needed to be done to serve the customer. Each employee learned by experience that leadership was there to serve them and not the other way around.

In overall satisfaction, 97.3% said, “It’s the best place I’ve ever worked.” They said: “I’m respected. I’m clear on what is expected of me. I feel served by others.” Exactly what you would want to hear, or -- as one manager put it -- “I’m now able to manage people differently, and I’m really learning how to lead, and am able to lead, because I’m not always bumping into the walls of the maze we had before! And people are responding differently too; there’s no finger-pointing, or blaming someone else, or saying they really didn’t understand what was expected of them—or by whom, or by when. Leadership sent out an annual survey asking employees to rate their service experiences with other internal departments. Questions such as: “What do you need from us? Are you happy with how we’ve been serving you? What could we do better to meet your expectations?” It all seems so simple and obvious now that it’s hard to believe we ever did it any other way.” ... I think a RAD service structure is the only way to sustain and grow in today’s world where the customer is in control.”

In one year, the company was profitable and began to show consistent bottom-line results. Their employee base had grown from 600 to 3200 people, and revenues had grown over 500%! But that’s not all: they earned nineteen JD Powers awards in twelve years, had a 98% employee engagement score, and were showcased nationally by Consumer Reports as the #1 operator in the nation several years in a row.

This small regional internet cable and phone company had successfully managed to survive and transform themselves in one of the most competitive environments in the country and achieved unprecedented recognition from customers and employees alike.
Their annual internal RAD measurement system was comprehensive:

A template was designed and administered to measure the performance of service quality among and between the internal departments who serve each other. The participation rate was in excess of 85%, a tribute to the already-engaged culture.

The survey was administered to a stratified, random sample of employees in each of the departments who were being served by other internal departments. Participants were asked to rate first the level of importance they attribute to each of four pre-determined service quality dimensions and then their current level of satisfaction. The RAD service improvement gap was calculated measuring the difference, or gap, between the importance and satisfaction scores: the higher the RAD service-improvement gap, the greater the level of dissatisfaction and the greatest opportunity for improvement. 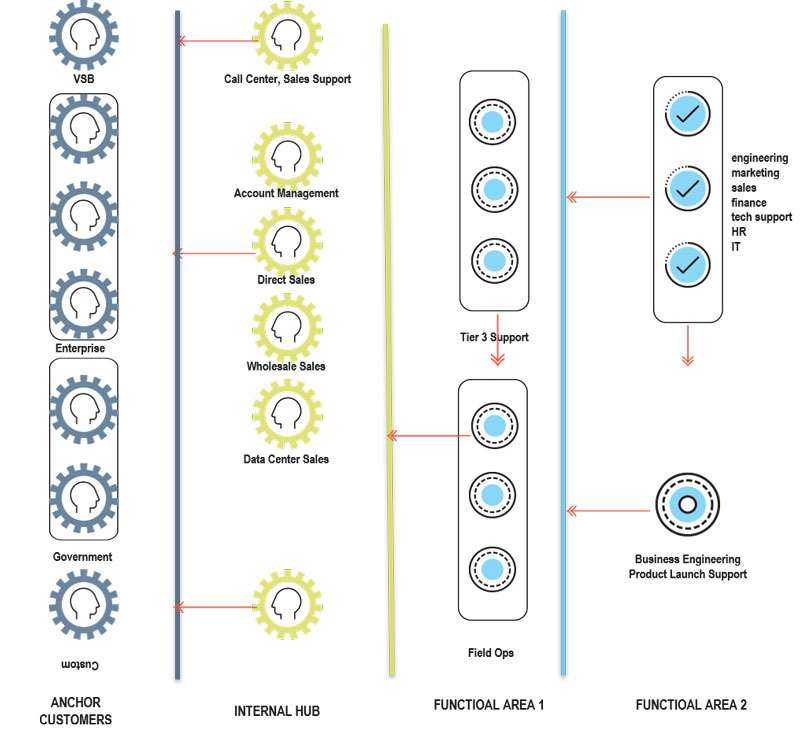 Saving the Career of a Strong Leader